The principal actors do a bangup job of adding wit, personal trauma, and wild eccentricity to the action, particularly John Stange as the wildly mood-swinging Walpurg and David Berkenbilt as a crackpot analyst-shrinkâ€”clearly a dig at the sex-obsessed world of Sigmund Freud. The supporting cast, including Ray Converse, Jen Bevan, and James Randle, add sinister helping hands as well…itâ€™s loaded with crazy, imaginative touches, including the weirdly effective costuming designed by Jen Bevan. Sister Annaâ€™s sexy pink habit is a nice touch as is the overly ornate habit of Annaâ€™s superior, the very weird and ultra-cranky Mother Superior, Sister Barbara (Mary Suib). Barbaraâ€™s pancake makeup and huge, fluttering fake eyelids make this character even funnier.

But perhaps the biggest hat tip of all goes to director Hanna Bondarewska. Working with scholars to establish a faithful, working English translation of this PolishÂ play, and helping her players get into their characters and navigate Witkacyâ€™s intriguing, multi-layered, glorious mess of a play, she brings a long-neglected playwright vividly back to life, exploring once again his oddly forward looking views on life, reality, art, andâ€”for better or worseâ€”the role of mind-altering substances in transporting an artist to other realms where creativity may somehow be more highly regarded as a glimpse of the divine.

For Witkacy, it seems, life might ultimately be summed up in the words of an American uppercase-challenged poet e. e. cummings, who later wrote:

listen; thereâ€™s a hell
of a good universe next door; letâ€™s go

Madness: For Witkiewicz, the play’s the thing

Theater goers, confined with him for 65 fast-moving minutes, are in for a hilarious romp as they are drawn into Walpurgâ€™s profound commentary on creativity and madness.

Director Hanna Bondarewska has created a spirited update of the play. The Â patientâ€™s file is handed to the viewer on entering, and it conveniently Â functions as the dramaâ€™s program notes. Two live computer Â screensÂ illuminate the action on stage, transmittingÂ real timeÂ images of the Â poet Walpurg. A brand new app for the iPad is unveiled when the trendy device becomes a weapon thatâ€™s used to beat our anti-hero.

Bondarewska brings this play to a close, gloriously, lightly, and ingeniously by deploying the song â€œChapel of loveâ€Â and blending it into Witkacyâ€™s surreally happy ending. This and other theatrical touches have earned for Bondarewska the attention of the current batch of literary scholars who are now giving Witkacy his belated due.

After she performed a staged reading of Witkacyâ€™sÂ Country House, she says, â€œI got phone calls from Professors Daniel Gerould and Mark Rudnicki,â€ experts on the playwrightâ€™s work which also includes an extensive portfolio of paintings. As a result of these conversations, â€œThey asked me to perform at their conference last year.â€ That formed the seed of this new production that inspired Gerould to journey to DC to see. Clearly, Bondarewska has earned his attention, and she deserves ours as well.

InÂ The Madman and the Nun, Bondarewska has brought to the fore the dangers facing the creative soul, which she describes as â€œmisunderstanding and vulnerability.â€

InÂ Madman, Walpurg expresses the pain of creation to Sister Anna, who releases him from the straitjacket, gives him a pencil, and quickly becomes his lover:

â€œIâ€™m composing poetry again now. But I think my poems are getting worse. I canâ€™t write anymore. But then you can also use a pencil to kill yourself.â€

The artistâ€™s suffering for lack of appreciation permeates the play. It seems to parallel the trajectory of the playwrightâ€™s own life. Witkacyâ€™s contemporaries and friends â€“ painters, composers, and, most well-known to Americans, pianist Artur Rubenstein – eclipsed him.

One of the Madman’s many looks.

For the playwright, competition constitutes only part of the artistâ€™s Â dilemma and the playâ€™s territory. The poetâ€™s vulnerability to all he sees, his Â own unconscious mind, his openness to the pain of others, his ability to see Â what the other has been throughâ€”all these feed his art yet drive him Â toward madness.

Witkacy has a lot of company. Here is an abbreviated list of just some of the Â artists who have died by their own hand:

Vincent Van Gogh said of his own recurring breakdowns,

â€œAnd perhaps the disease of the heart is caused by this. One does not rebel against things, it does no good; nor is one resigned to them; oneâ€™s ill because of them and one does not get better.â€

Must it be this way?

Like the poet Baudelaire, he despaired,Â I have felt the wind of the wing of madness.

â€œAs for that initial triggering mechanismâ€”what I have called the manifest crisisâ€”can I really be satisfied with the idea that abrupt withdrawal from alcohol started the plunge downward? â€¦ Or could it be that a vague dissatisfaction with the way in which my work was goingâ€”the onset of inertia which has possessed me time and time again during my writing life, has made me crabbed and discontentedâ€”had also haunted me more fiercely â€¦?â€

He, like Witkacyâ€™s poet, finds a way through the morass, depending on how the viewer chooses to read the ending of the play. That duplicity, the either/or, the to-be-or-not-to-be, is the territory of the play.

Bondarewska, artistic director of DCâ€™s Ambassador Theater troupe, fully understands the artistâ€™s plight. In presentingÂ Madman here, she wants to make a difference. The play for her is the thing but not the only thing. She teaches through her program Ambassadors of International Culture and is now working with children at Hoffman-Boston Elementary school in Arlington, Virginia.

Sister Anna (Jenny Donovan) lets her hair down while an Assistant in the asylum (James Randle) looks on and exercises his imagination.

Her aim is to to build confidence, communication and hope. She wants to insulate the young mind against the vulnerability the creative soul faces. But in addition, she lives for the artist in us all. â€œIn todayâ€™s world of technology,â€ she says, â€œthe artistâ€™s time is ever more narrowed to be free, to be devoted to their art.â€ Her greatest fear is that the contemporary artist, like Witkacy, will choose suicide rather than go on living and creating art.

The Madman and the Nun is a witty, lively, but extraordinarily thoughtful play. Theatergoers, artists, creative souls and anyone who wants both a fast romp and an intellectual challenge should carve some time out of their busy schedules to take in this most unusual play.

The question remains, â€œIs the artist doomed?â€ For a positive take, listen to Elizabeth Gilbert who gave the following TED talk on precisely that question. This clip is on the long side, so sample as much as you wish.

Mary L. Tabor is the author of the memoir:Â (Re)Making Love: a sex after sixty story andÂ The Woman Who Never Cooked. She says, â€œI ferret out the detail, love the footnote, am never bored and believe it all leads to story. Best advice I ever got? â€˜Only connect â€¦â€™ E.M. Forsterâ€ Find out more atÂ http://maryltabor.com

The Madman and the Nun at Ambassador Theater

The Mead Theatre is, indeed, a lab. As soon as you enter the lobby, you are immersed in what appears to be an art exhibit â€” yes, you are in the right place â€” and invited to peruse programs in the guise of medical files. 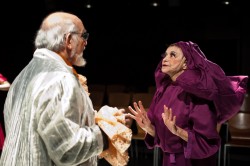 David Berkenbilt as Dr. Grun and Mary Suib as Sister Barbara in The Madman and the Nun. Photo by Magda Pinkowska.

The theatrical experiment begins fittingly early for Stanislaw Witkiewiczâ€™sÂ The Madman and the Nun, in which Dr. Bidello (a dementedly overdramatic Ivan Zizek) is only too eager to pawn his job of curing a deranged poet, Walpurg (John Stange), off on an unlucky nun and a freewheeling psychiatrist. Walpurg turns out to be the poet his new caregiver, Sister Anna (Jenny Donovan), read with her ex-fiancÃ©, an engineer who committed suicide. This disclosure prompts Walpurg to quip, cheerfully, â€œSo nowadays even engineers can have problems like that?â€ In no time at all, Sister Anna has returned Walpurgâ€™s â€œI love youâ€ and renounced her religion on his behalf.

DirectorÂ Hanna Bondarewska has neatly orchestrated both the quietude necessary for the intimate moments between Walpurg and Sister Anna and the chaotic hilarity that ensues when the entire cast is onstage. Her swooping choreography when Anna helplessly joins Walpurg in a looping rocking sequence in one scene is mesmerizing.

The ensemble is comprised of Mary Suib (as the chastising Sister Barbara with a â€œpenitence complexâ€), David Berkenbilt (as the doctor with â€œa little too much of the sexualâ€ in his theory), Ray Converse as the batty Professor Walldorff, James Randle and Jen Bevan as Attendants.Â Berkenbilt is delightfully absurd. When Walpurg kills Dr. Bidello in a fit of whimsical jealousy, he exclaims, â€œThis is unheard of! So you really feel alright?â€ He is laughably recognizable as the psychiatrist who gets â€˜treatedâ€™ by the patient. The croaky catch in Suibâ€™s voice slows down her delivery making her punch lines all the better. Converse plays Walldorff as sexually ambiguous, making his critique of Berkenbiltâ€™s â€œtoo sexualâ€ theory all the more ironic.

John Stange brings a warm, strange humor to his portrayal of the straitjacketed, insaneÂ poet who oscillates between sarcastic cheeriness and paranoia, sometimes by merely redirecting the distance of his gaze. Youâ€™ll laugh hard when Walpurg and Anna are caught in flagrante because Jenny Donovan keeps the timid nunâ€™s sexuality subtly latent.

Costume Designer Jen Bevan decks Donovanâ€™s Anna out in aÂ hot pink dress with chunky, sparkling heels to match. Set Designer Daniel Pinha has two monitors emitting colorful EEG waves on either side of a mounted mattress in the center of the stage. Marianne Meadowsâ€™ lighting effectively evokes the prison that is the sanitarium and David Crandallâ€™s sound design is quietly omnipresent.

The finale is dissociation of the self-physicalized â€“ and theatre of the absurd realized.