Havelâ€™s ultimate goal as a playwright was to appeal to his spectators, to provoke them into self-reflection and encourage them to change. His main concern was for human identity and its survival in the oppressive environment, including the globalized modern world. â€œWill the Czech actresses outdo the legend? Will they reach a state on the edge, recalling Havelâ€™s motif of alienation?â€ These are some of the questions which had been asked about the performance by the theatre critics and educated enthusiasts of Havelâ€™s works. What about an average American theatre goer with rudimentary knowledge of the Czech playwrightâ€™s legacy and a minimal awareness of what it is like to live in an oppressive state? What wouldÂ Antiwords, based onÂ VÃ¡clav Havelâ€™s playÂ Audience, tell them about the author and his culture, how would the performance connect with them and their 21st century context?

Last Saturday,Â September 21, 2013, at the opening ofÂ Antiwords, presented by the Ambassador Theatre in partnership with the Embassy of the Czech Republic and the 2013 Mutual Inspirations Festival, I had my American friends sitting to my left and the Eastern European ones on the right and was eagerly awaiting their reactions and impressions. What If Havel himself was in the audience, I thought? What would he feel and say?

Several minutes into the play I was sure that Havel would laugh, as we all did during the opening scene reminiscent of the communist â€˜mise en scene.â€™ Imagine two identically dressed and drearily looking actresses slowly walking onto the almost bare stage, carrying oversized paper mache heads under one arm and shopping bags containing beer bottles and jugs under the other. The laughter erupts when ÄŒechovÃ¡Â and Krivankova, facing the audience, place the beer bottles between their upper thighs and leave them protruding, open them with beer openers hanging from their necks latch- key style, and start pouring the beer into jugs using gentle but suggestive pelvis thrusts. What do we think we are looking at? The association is instant â€“ two drunks urinating in public; image slightly shocking, but unexpectedly funny. Mind you, we had been warned. The directorâ€™s Peter Bohac warning had been read out to us before the performance â€“ â€œIf you have anything against drinking, leave nowâ€.

The laughter continues when the oversized heads and menâ€™s jackets transform the female actresses into the characters fromÂ Audience â€“ Vanek and the Foreman.Â Audience, written in 1975 belongs toÂ The Vanek Trilogy, three partly autobiographical absurdist plays bound by a character of Havelâ€™s alter-ego Ferdinand Vanek, a dissident writer and intellectual. InÂ Audience, Vanek, just like Havel in real life, is forced to work at a brewery, rolling barrels. The absurd starts when his boss, the brew master who earns brownie points with authorities by reporting on his dissident subordinates, calls him into his office and offers him a better job in return for inventing and admitting to political activities. At the end of a long and repetitive verbal exchange driven by the foreman who keeps knockingÂ down beers like lemonade and forcing his reluctant subordinate to drink with him, Vanek, despite his apparent timidity, refuses to participate in â€œsomething I have always found repugnantâ€ and asserts his identity and values despite all odds.

MiÅ™enka ÄŒechovÃ¡Â and Sivan Eldar from the Spitfire Company, the creators ofAntiwords, courageously abandoned the playâ€™s dialog and conventional acting and successfully transformed the play into a physical spectacle with the help of music, dance, movement and grotesque props, not to mention beer drinking, an ingrained element of Czech culture, society and history. Drawing on Havelâ€™s love of the absurd and the visual and his dependence on humor as an indispensable tool of survival, they created a challenging and entertaining version of the conversation between the oppressor and the oppressed. Displaying only a few carefully selected fragments of the playâ€™s dialog on the screen the directors decided to place their trust into the actorsâ€™ bodies and the oversized heads to convey the emotions, messages, moods and behaviors of the characters and the situations. The effect is brilliant. The highly skilled actors alternate between the characters, and although looking identical, are able to transform instantly as if by magic. InÂ Antiwords, words are spurious; movement and dance combined with music or silence are sufficient to entertain and provoke the audience to react â€“ even those only slightly familiar with the spectacleâ€™s background and context… To Read More

VÃ¡clav Havel is well known for having been a political dissident, but he was also a well-regarded playwright in his time. His writings were banned by the Communists in the â€™70s and he became leader of the revolution that drove them out of power. In 1993, he was elected president of the newly independent Czech Republic. 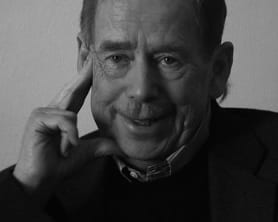 To honor the man, his writings and all he has done for the Czech Republic, theÂ Mutual Inspirations Festival is focusing on Havel in a month-long celebration through theatrical performances, film screenings, concerts, lectures, and exhibitions.

The Mutual Inspirations Festival was created in 2009 by the Embassy of the Czech Republic, focusing on the mutual inspirations between Czech and American cultures and featuring each year an extraordinary Czech personality who has greatly influenced and inspired others through his or her work. Past honorees have been Garrigue Masaryk, AntonÃ­n DvorÃ¡k and MiloÅ¡ Forman.

The theater offerings kick off at the Ambassador Theater at 8 p.m. on Saturday, Sept. 21 with the Spitfire Companyâ€™s preview ofAntiwords, a story that draws inspiration from the works of Havel, especiallyÂ Audience. The play is directed byÂ Petr Bohac and performed by prominent Czech physical theater actresses Mirenka CechovÃ¡ and JindriÅ¡ka KrivÃ¡nkovÃ¡, and appears at the Atlas Performing Arts Center. 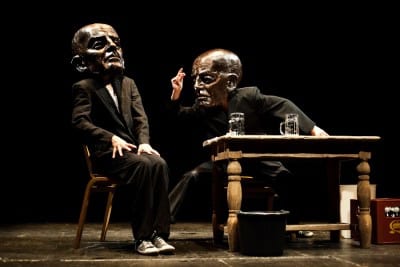 Hanna Bondarewska, founder and artistic director of Ambassador Theater, was a great admirer of Havel, and in December of 2011 was this close to contacting him about working with the theater.

â€œI had been thinking about Havel since I started a theater and I was thinking about getting in touch with him to invite him on our Honorary Board. I remember when I was traveling to Poland for Christmas, I already planned my visit to Czech Republic to get in touch with him and while on the plane I learned that Vatslav Â Havel had passed away,â€ Bondarewska says. â€œI was devastated since I admired him so much as a statesman and writer and humanitarian.

I had books with the translations of his plays and I was already thinking aboutÂ Audience andÂ Protest.â€

It was Gail Humphries Mardirosian, chair of the department of performing arts atÂ American University, who was the main force behind the Mutual Inspiration performance, connecting Bondarewska to the Czech Embassy and Czech performers.

â€œGail told me about the festival and immediately introduced me to wonderful woman, Ms. Barbara Karpetova from the Czech Embassy. Then I met Mirenka and thatâ€™s how our adventure with Havel began.â€ …to Read more