Set in the drab, basement office of high school “Peace Counselor” Laura Whalen, RAGE revolves around the escalating encounter of the counselor with agitated, about-to-be-expelled high school senior Raymond Stitt. Played with tremendous dexterity and fluid theatricality, actors Ariana Almajan as Ms. Whalen and Marlow Vilchez as Raymond move across the stage like prize fighters defending their titles to the death: she, the champion of Pacifism and the gentler angels of our nature, and he, the champion of realism and the darker angels of our souls. Who among them will win this battle for heavyweight championship of the world?

The student Raymond, known as “Rage” by his only two friends, has grown increasingly marginalized within the high school’s social milieu. Yet, even his two lone friends deserted him when his disaffection with hypocrisy and myopia exploded in history class. And certainly the history teacher’s patience was exhausted by Raymond’s intense inquiry into Hitler’s political appeal, and Raymond now faces suspension. We learn of Raymond’s chilling impersonation of Hitler as if he were making an impassioned speech to the Nazi Youth Brigade, though Raymond insists his speech was merely theatrical provocation.

Peace Counselor Whalen has nonetheless persuaded the history teacher to let her talk to the young man, and persuade him to embrace a more pacifist perspective. Raymond appears in her office just as she was about to leave to seeÂ Le Mis with her live-in (but still non-committal) boyfriend. Raymond challenges her to stay, and she soon acquiesces to his insistence.

Over the course of the play’s 90 minutes (without intermission), the confrontation between the two of them advances and retreats and ultimately escalates to an urgency that has become achingly real in schools across the continent. Yet, rarely is the anguished reasoning of disaffected and marginalized youth presented as clearly and articulately as it is in RAGE, and keen applause to playwright Riml on her incisive script.

Under Director Joe Banno’s able direction, Ariana Almajan and Marlow Vilchez excel at the verbal & eventually physical dual between them. As the 38-year-old, engaged-but-not-married peace educator Laura Whalen, Almajan brings a persuasive single-mindedness the role. Indeed, her character’s very identity, as well as her livelihood, depend on her unflinching embrace of peace and the promise of pacifism to quiet the heady waters of our times. She is at once calm, compassionate, insistent, and explosive. Marlow Vilchez’s portrayal of the young man Raymond embodies the accumulated outrage of the outcast. Vilchez fills the character of Raymond with brooding intelligence and grim conclusions disallowed by officialdom. Disillusioned and angry beyond what his young consciousness can bear, Vilchez brings Raymond’s pain full throttle onstage.

A grueling, unwavering gaze at the limitations of ideology and the tragedy of marginalization, RAGE brings us to the brink.

Appropriate for ages 15 and above.

Rich Massabny
Producer/Interviewer/Reviewer
â€œArlington Weekly News TVâ€
Comcast CHANNEL 69 –FIOS Channel 38
Broadcast 2014: Thurs., Nov. 6, 6 p.m.; Sat., Nov. 8, 10:30 a.m.; Mon., Nov. 10, 8:30 p.m.
richmassabnyreviews.blogspot.com
AMBASSADOR THEATER – - â€œRageâ€
In the last two weeks, Iâ€™ve seen two of the finest two-person plays in a long time.
This one is the Ambassador Theaterâ€™s (D.C.), â€œRageâ€ by Canadian playwright Michele
Riml, winner of the 2005 Sydney Risk prize for Outstanding Original Play. â€œRageâ€ is a
hold-your-breath drama between a gun-toting high school student and a pacifist female
school counselor. With no intermission, this ready to die or kill student, Raymond â€œRageâ€
Stitt (Marlowe Vilchez) and counselor Laura Whalen (Ariana Amajan) are locked in a
showdown in the counselorâ€™s basement office. The acting between these two is so real,
especially in light of recent school shootings. Directed by well-known Helen Hayes
Award winner Joe Banno and produced by Ambassador artistic director and founder
Hanna Bondarewska. Do Not Miss This One!! â€œRageâ€ runs Wednesdays through
Sundays through November 16 at the Mead Theater Lab at Flashpoint, 916 G St. NW. For
more information and tickets, call 703-475-4036 or check the website at www.aticc.org. 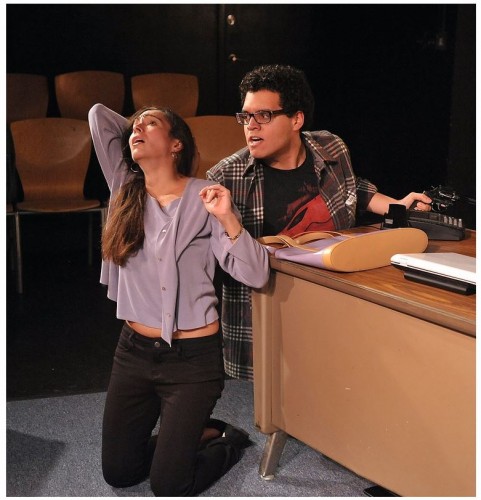 It is not every day that many of us find ourselves staring down the nozzle of a gun from either side of the trigger, but if you go seeÂ Rage at Ambassador Theaterâ€“and youÂ should go see itâ€“then that is exactly what you will experience. Guns, violence and the puzzle of peace face to face, close up and personal. Written by critically acclaimed Canadian playwright Michele Riml, this two-person, award-winningÂ play is directed by Joe BannoÂ and produced by Hanna Bondarewska for the Ambassador Theaterâ€™s 5th season and the playâ€™s US premiere.

Laura Whalen, played by Ariana Almajan, is a perky, pretty-in-pink high school counselor who enshrines Gandhi in her office and follows a pacifist lifestyle. At the playâ€™s opening, her workday has drawn near its close, and though mentally checked out and ready to go enjoy the playÂ Les Miserable with her boyfriend, she has one last appointment to squeeze in: the troubled Raymond. When Raymond comes in, we quickly learn two things; that he prefers to be called â€œRage,â€ and that he gave a violent presentation in class and may be expelled. Before the session is over, Rage takes Laura hostage at gunpoint and tells her only one of them will be leaving the room. Who gets to leave is her choice. Will she choose to die at his hand for her pacifist lifestyle, or will she kill him and save herself, and presumably, others?

Almajan gives such an excellent performance as Laura that at the beginning you might think, wow, she is not that good of an actress. You rapidly realize, however,Â that she is acting as someone who is poorly pretending to be someone and something she is not. With the shedding of layers, Ariana creates a character in Laura that is so real and vivid that the experience of it will likely leave you raw and shaken along with her.

Vilchez, playing Rage, will leave you rapt and held at terrified attention with his explosive performance. â€œI go off,â€ Rage comments, and throughout the play you never know when he will â€œgo offâ€ again, how many more times he might blow up and what he might do to Laura as she struggles desperately to find a way for them both to live.

AlmajanÂ and Vilchez allow the audience to step into their shoes and experience with them the situation unfolding in the tiny basement office. â€œIf you can get in someoneâ€™s head, you have a better chance of understanding them,â€ Rage says towards the playâ€™s opening, defending his presentation. This is exactly the idea of this production, and the artistic director, Hanna, hopes that in watching the play, a space for dialogue can open up and audiences will start engaging in the questions that shape the play.Â Rage allows the audience to step for a very long, unforgettable moment into the shoes of the gun wielders so often taking over the headlines and to experience what having to make life and death choices is like, and to question our own beliefs. To paraphrase one line of the play, â€œItâ€™s easy to have ideas when youâ€™re not confronted with anything,â€ andÂ Ragedefinitely confronts the ideas society has built up around violence and peace.

Everything within this production pulls audience members into the experience ofÂ Rage; the spot-on lighting and sound effects; theÂ intimate set that lets audiences practically sit in the closet-office with the action; the fast-fired dialogue and completely natural reactions of the charactersâ€“even the occasional joke or witticism that has the audience laughing in the darkness. Even the subtle details echo and engrave the heart of the play, like the way that Laura goes from happy-pink cheerfulness with tied back, tight hair at the beginning to an unbuttoned, colourless, messy haired, utterly undone being as Rage wreaks havoc on her and her beliefs. â€œYou canâ€™t be who you are with a gun in your face,â€ Laura screams back at Rage as he yells at her again about â€œbeing peace.â€ â€œWhy not?â€ He asks her back. â€œThere was always a gun somewhere.â€

This gun itself; you, too, will come face to face with it due to the intimate set. From every angle of the stage, looking up and down its nose, watching it wave, waiting for it to go off along with Rage. There is nothing sheltering about this production, it is a powerful piece with no holds barred. This is Halloween, and everything right now is all about cool costumes and the scare factor. But if you really like scary and you want to be scared, then come see this production.Â Rage is wonderfully executed, terrifyingly brilliant, and seriously scary. Donâ€™t expect to walk away unscathed: this is theatre at its most palpable.

Michele Rimlâ€™s Rage made its US premiere this week at Flashpointâ€™s Mead Theatre Lab. A production of Ambassador Theater, directed by Joe Banno, Rage explores the dynamics of adolescent rage from a Canadian perspective.

The taut 90-minute drama pits a highly intelligent, disaffected high school senior against a pacifist 38-year-old student counselor. The results are engaging and provocative even if on occasion you might find yourself exhausted by the intensity of the exchange.

The violence of disassociation, estrangement, and disgust permeates the world. The violence of State agents also rages on around the globe, with the arms industry the only true winner. People who believe, as Gandhi did, that violence even when â€œit appears to do good, the good is only temporary; the evil it does is permanent,â€ have little sway, particularly in the United States where military spending even in sequestration far outstrips military spending worldwide.

Rageâ€™s two-person dialogueâ€“one part human drama, one part sociological experimentâ€“depicts the emotional and intellectual landscape produced when the power of violence confronts a commitment to peace.

Ariana Almajan plays Laura Whalen, a part-time high school counselor, whose office is seemingly buried in the schoolâ€™s basement. A committed peace activist, she truly believes that discussion will solve not only the worldâ€™s problems but more specifically the problems confronting young people as they struggle with issues of power and love. Her low status at the school and in society, however, demonstrates just how ill-regarded this pacifist approach to solving issues has become.

Marlowe Vilchez plays Raymond Stitt, aka. Rage, an emotionally explosive high school senior unable to come to grips with the hypocrisies of the adult world, or with the absurdities of his domineering mother and overly passive father.

Rageâ€™s day has not gone well. During an oral history report on the rise of Hitler to power in Germany, during which he stepped into the shoes of the fiery orator and railed against the Jewish people, he and his ranting scared classmates and teacher alike. Now, heâ€™s threatened with expulsion.

Laura has intervened in hopes of saving his high school career. She meets with Rage at the end of the school day. She successfully gets him to open up about the purpose of his oral report as she tries to understand his behavior and motives. When Rage pulls a gun on her, however, the counseling ends and Rageâ€™s thought-experiment begins. Where it might end is up to the players.

Both actors do a fantastic job navigating the emotional rollercoaster that isÂ Rage. Ms. Almajan realistically captures the vulnerability and the fear of the situation, while Mr. Vilchez keeps his disgust with the world specific and credible. Director Joe Bannoâ€™s pacing of the show is well modulated, even as the script dips into repetition a little near the end.

Thereâ€™s little doubt that the concerns raised byÂ Rage are on the minds of many Americans, even if individual gun ownership and â€œstand your groundâ€ laws (not pacifism) are the doctrines most in vogue in the United States these days.

Rage canâ€™t be beat for sheer intensity, and its issues are as pressing as tomorrowâ€™s news.