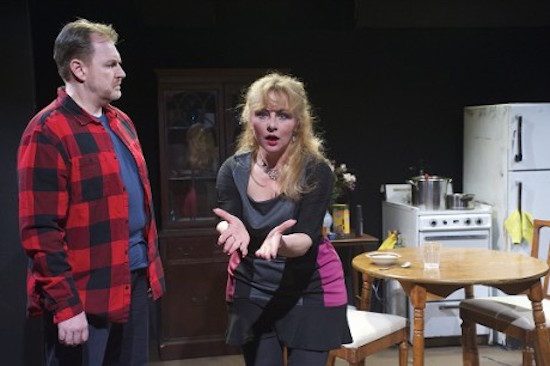 In case you havenâ€™t noticed, weâ€™re in the middle of probably the most contentious presidential election in a generation.Â Â Once the trash-talk dies down, we might actually get to talk about the issues, of which there are many.

How bad is it?Â Â Consider that once we get past the shock of Donald Trumpâ€™s language and the pugnacious attitude of his staff and crew, we discover that what really ticks people off is stagnant wages, rising prices for necessities, evictions of honest hard-working people, etc.Â The media meanwhile, are so obsessed with gossip about the latest outrage from The Donald that they donâ€™t give us time to notice just how miserable the economy really is.

The show is great funâ€¦

Enter Ambassador Theater and their celebration of Dario Foâ€™s provocative, unabashedly leftist comedy,Â They Wonâ€™t Pay? We Wonâ€™t Pay! Set deliberately in the present day, and subject to revision and adaptation every time it is staged,Â They Wonâ€™t Pay? borrows liberally from the Italian Commedia dellâ€™ Arte tradition to tell a tale about our contemporary economic crisis.

In this American incarnation of Foâ€™s classic we have all the makings of a screwball farce, with enough pratfalls and evidence hidden from view (not to mention the occasional stiff) to fill an entire Vaudeville hall.Â Â The action begins with a run on the local supermarket; shoppers, outraged by the sudden increase in prices, begin to loot the store shelves of everything and head home with their stolen goods. So far, so good; but how to hide the stuff from the police?Â Â Answer â€“ instant pregnancy.Â Â Suddenly, all the women in the neighborhood appear with â€˜baby bumpsâ€™ loaded with pasta, olives, tuna, etc.Â Â And because the local police canâ€™t be trusted to enforce the law even the Feds get involvedâ€”to no avail.

The somewhat ditsy heroine here is Antoniaâ€”played with gusto by Hanna Bondarewska, who channels Lucille Ball by way of Foâ€™s late wife Franca Rame.Â Â Her partner in crime is Margherita (the charming Moriah Whiteman), and much of the comic business here revolves around the â€˜baby bumpâ€™ plot and its unintended consequences.Â Â Itâ€™s not too long before Margheritaâ€™s husband Luigi (the charismatic Mitch Irzinski) learns of his wifeâ€™s instantaneous conception, and he and his best buddy Giovanniâ€”Antoniaâ€™s husband, played here by Daren Marquardtâ€”proceed to wander all over town looking for the â€˜babyâ€™ and its â€˜mum.â€™Â Â Occasionally wandering into this mess, in a variety of guises, is the irrepressible Peter Orvetti, whose quadrupling of roles becomes a rather pleasant running gag throughout.