We Love Arts: The Little Prince 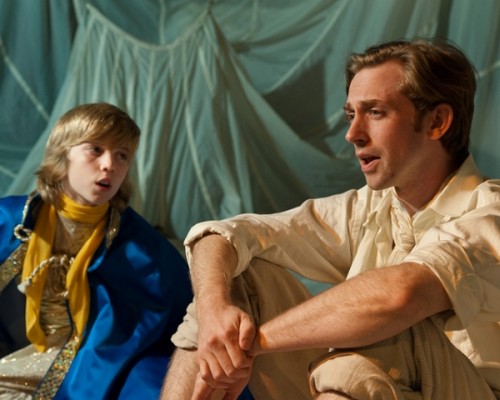 There are many delights inÂ Ambassador Theaterâ€™s production ofÂ The Little Prince, but chief among them for me was watching the reactions of the children in the audience. â€œWho I am writing a review for?â€ I asked myself afterward. Itâ€™s unlikely any of those enraptured five-year-olds would care what I think. Their parents? Perhaps. Funny then that this push-pull between the world of adults and children is at the heart of the much-loved book by Antoine Saint-Exupery (or Saint-Ex, as heâ€™s affectionately known in my neighborhood).

From the small set beautifully draped in tunneling parachutes to the whimsical shadow puppets helping transport the audience to outer space, this is an evening of bothÂ sweetness and sadness that held the attention of the children I saw there. One even may have fallen in love with the little prince herself. For adults, the play is a reminder that, â€œIt is only with the heart that one can see rightly. The essential is invisible to the eyes.â€

If youâ€™ve never read the book, written by French aviator Antoine Saint-Exupery after surviving an almost-fatal plane crash in the Sahara, or havenâ€™t read it to your child, donâ€™t worry. This adaptation by Rick Cummins and John Scoullar is quite faithful but easy to navigate. Children rarely figeted and their attention was held throughout. This is in no small part due to director and designer Lilia Slavova, who ably guides the ensemble of four actors through a hypnotic world.

Itâ€™s also a testament to young Ian Pedersen, who embues the Little Prince with a stoic yet hopeful melancholy thatâ€™s engaging to watch. Though he has to deliver many lines with a dreamy air directed outward to the audience, he manages to make the usually mystical prince a very real boy. His interactions with his beloved and vain Rose, the dangerous Snake (both wonderfully performed by Ilana D. Naidamast), and the spirited Fox (Sarah Olmstead Thomas)Â highlight the lessons children have to learn in order to grow. Note I donâ€™t say growÂ up. That pitfall is embodied in the woeful Aviator (Alex Vernon), whose inability to see with a childâ€™s eye anymore has almost broken his will.

The Aviatorâ€™s struggle to regain his youthful hope may mainly resonate with the adults in the audience. Itâ€™s the one difficulty in this production, and however talented an actor Vernon is (his masked turn as a self-centered king is truly hilarious) those strident moments seem to deflate the magic. But thatâ€™s a flaw easily overlooked.

My inner childâ€™s favorite moment was the meeting of the Little Prince and the Fox. Having just heard that scene read at the wedding of a dear friend, I was reminded of how it struck me as a child â€“ sad, wistful, full of the inevitability of love lost. However, Slavova wisely pumps up the gleefulness of this meeting with an adorably funny dance between the two, and Olstead Thomasâ€™s Fox is so friskily frantic that taming brings a necessary and lovely maturity rather than a heartbreaking sadness.

Parents with children easily frightened should note that the Little Princeâ€™s scenes with the Snake are mysterious rather than obvious (his disappearance from earth is in blackout) and I didnâ€™t notice anything other than normal apprehension followed by delight when the masked figures began to appear.

Truly, this is a lovely evening at the theater for children and especially for parents looking to introduce them to an almost surreal, magical theatrical experience. And if you yourself, adult, are looking for an escape and a reminder of what is essential, then rest here for a while.