They Donâ€™t Pay? We Wonâ€™t Pay! from Ambassador Theater (review)

March 7, 2016Â byÂ Daron Christopher
The mark of master storytellers is that they can makeÂ a given narrative hold resonance and power beyond the narrow context of theÂ original time and place. By this standard, much art will ultimately fall short, stripped of its context and relevance as time marches on. The work that endures captures truth, even when in a different language and time. Italian actor-playwright Dario Fo is considered such a storyteller.

Beyond his considerable comedic instincts, this is due to his choice of material, often focused on promoting the solidarity of aÂ working class smothered by a heartless ruling elite. If unfortunate for Foâ€™s idealism, the persistence of the struggle lends his work a timeless quality â€“ particularly in the case ofÂ They Donâ€™t Pay? We Wonâ€™t Pay! 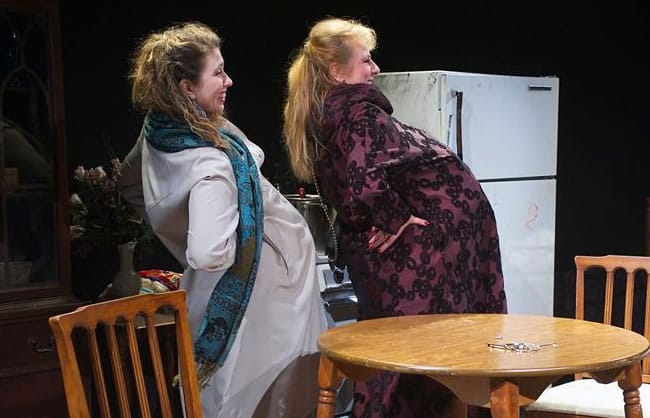 Originally set and premiered in Italy in the late 1970s, Foâ€™s creation is the story of ordinary people in various stages of subversion against a â€œfree marketâ€ stacked against them and teetering in the throes of collapse. Fo has revised the story over the decades to maintain relevance, but the broad contours of the conflict remain unchanged and familiar. Just in time to mark Foâ€™s 90thÂ birthday, co-directorsÂ Joe Martin and Danny Rovinsâ€™ latest rendition, presented by Ambassador Theater, seamlessly adapts the action to Great Recession-era Newark:Â talk of foreclosures,Â grumbling over bailed out banks,Â references to Ben Bernanke. (It is a sign of some progress that critical asides about the Pope have been amended to â€œthe previous Pope.â€)

With wages depressed and the cost of living ever increasing, a group of women decide to take direct action by helping themselves to â€œfive finger discountsâ€ at the grocery store. They include Antonia (Hanna Bondarewska) and Margherita (Moriah Whiteman), whose capacity for direct action greatly exceeds their husbandsâ€™, Giovanni (Darren Marquardt) and Luigi (Mitch Irzinski). The men, ground into exhaustion by the low pay and tedium of their work, have a longer journey in imaginingÂ how to even begin meaningful rebellion. Giovanni, in particular, would go without food before considering picking up his wifeâ€™s brand of civil disobedience. 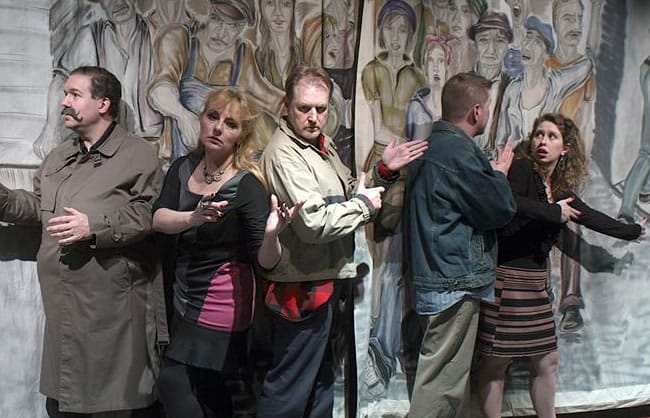 Despite itsÂ soaring social vision, the production is not nearly as sober as a Bernie Sanders keynote.Â Pay injects plenty of levity and even slapstick as the women adopt an elaborate ruse presenting Margherita is pregnant to conceal their grocery bounty when Giovanni unexpectedly returns to the apartment. Further shenanigans abound as the women scramble to conceal their thievery from police whoÂ conduct a mass sweep in search of the stolen goods.

Peter Orvetti plays a quartet of characters, distinguished mostly by modest costume changes. The most memorable and interesting is a police officer who,Â  proud of his college pedigreeÂ during which he may haveÂ thumbed through some Marx in the library, adoptsÂ aÂ more nuanced view of whichÂ thieves the police should be investing their energies pursuing.

The talented cast brings enormous energy and spirit, particularly to the rolesÂ ofÂ the women feeling the rush to adoptÂ direct action as a means of putting food on the table. A little of the slapstick goes a long way, however, growing tiresome toward the middle of the second act. Indeed, one revision that I would welcome is a tightening of the pace. With an intermission, I felt the 2 and a half hour length was better suited to a story of epic scope â€“ rather than one primarily confined to a tiny apartment.The production design effectively captures the cramped frustration of the charactersâ€™ living space and makes effective use of the one other setting: a mural on a curtain depicting a range of ordinary laborers, circa 1930s. Itâ€™s the kind of image that evokes the art that dotted lobbies and corridors in countless buildings during the heyday of the Works Progress Administration. Now many of these images are fading by neglect and design alike.Â Witness the 2011 episode in which the Republican governor of Maine took aim at a mural in a government building depicting the stateâ€™s labor history, on the grounds it sentÂ an anti-business message. Â (It was the Department of Labor, no less.)

As the final moments ofÂ They Donâ€™t Pay? We Wonâ€™t Pay! allude, most of us who make our living from wages should see ourselves in these images and stories, even asÂ the clothing â€“ or the language -changes. We let them fade at our collective peril.