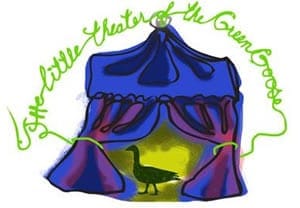 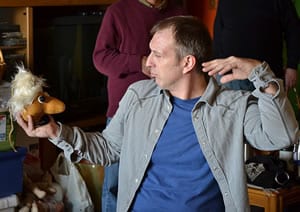 The first,Â The Visitor, tells the story of an actress and the policeman who comes to herÂ apartment because a well-known serial killer has said he is coming after her. Itâ€™s tense and yet funny as the two discuss justice, fate, acting, and coffee, and wait for him to appear. It becomes clear quickly that all is not as it seems and ends with a fun twist. As the play went on, it was tough to tell if it was a thriller, a comedy, a philosophical treatise, or a farce, but it also didnâ€™t matter. It was fun.

The set design by Greg Jackson changes for each one-act, but both sets are sumptuous and beautiful. The Visitor features the artwork of prominent artist Agustin Blazquez. (He is from Cuba, but specializes in Egyptian art). His pieces, including an Egyptian mummyâ€™s case, are complimented by fun things like a gilt stand telephone and a beautifulÂ coffee set. In the second one-act,Â The Peephole, the set becomes more modern but no less stylish with slightly naughty hieroglyphs on the walls â€“ and a couch set I wish was in my living room.

The Visitor, directed Gail Humphrey Mardirosian, makes full use of the stage and the set since at several points, the actors are sent around the stage searching frantically or hiding out. She keeps the pace up and the tension building admirably. Hanna Bondarewska (Negma Sadiq) revels in the role of the diva who is not to be cowed but is drawn to the killer and Ivan Zizek as the visitor makes an excellent foil. For the vast majority of the play, they are alone in that apartment and they and the director and the actors work hard to keep the audience mesmerized and involved, and everything moves quickly.

After intermission and the transformation of the set, Hanna Bondarewska takes over as director for the second one-act,Â The Peephole, which is the story of another famous actor Hasan (Ivan Zizek), as he arrives home to find a murdered woman in his bedroom. He calls his neighbor, the lawyer Husayn (Stephen Shelter or James Randle on alternate dates) who calls a psychiatrist Hasanayn (Rob Weinzimer)Â and a criminal (Adam R. Adkins) who can takeÂ the body away. Why they need both a criminal and a psychiatrist is because the murdered woman keeps disappearing and reappearing throughout the play. Bondarewska also plays the woman in a suitably gory, gorgeous costume.

This one-act got more and more surreal as it went on.The actors just threw themselves into their roles and seemed to relish the zinging one-liners they lobbed at each other â€“ and the possible mental breakdowns happening all over the stage. What was fun though was how it echoed the other play.The evening is calledÂ Trespassing, and between the frantic searches, the murderer in the first play and the murdered in the second, and the central role of a telephone, it was fun to see what they included and echoed in each act.

Lighting Designer Marianne Meadows did a great job, especially with the more surrealTheÂ Peephole. A large part of the plot rested on her design to let us know whether the ghost (real woman? Hallucination?) was there or not. Also, in the first one-act, her warm lighting design complimented the artwork beautifully.

Playwright Alfred Farag was born in the 1950s and wrote dozens of plays still known and studied in Egypt for their dialogue and use of Arabic. Translator Dina Amin has managed to capture some of that joy of language.Â Both plays had some good exchanges and running jokes, like the psychiatrist answering many queries with, â€œIn your childhood or adolescenceâ€¦â€

The Ambassador Theater International Cultural Centerâ€™s mission is to build international cultural awareness and succeeds with these plays, not because they showed us such a different and strange world, but because the world Farag wrote about is so familiar. The laughs work on every level and two stories about famous actors and their insecurities, lawyers, and shrinks are so universal.

If you are Egyptian or American or from any other part of the world you will enjoy these two quirky and funny one-acts. Their universal messages will hit home.